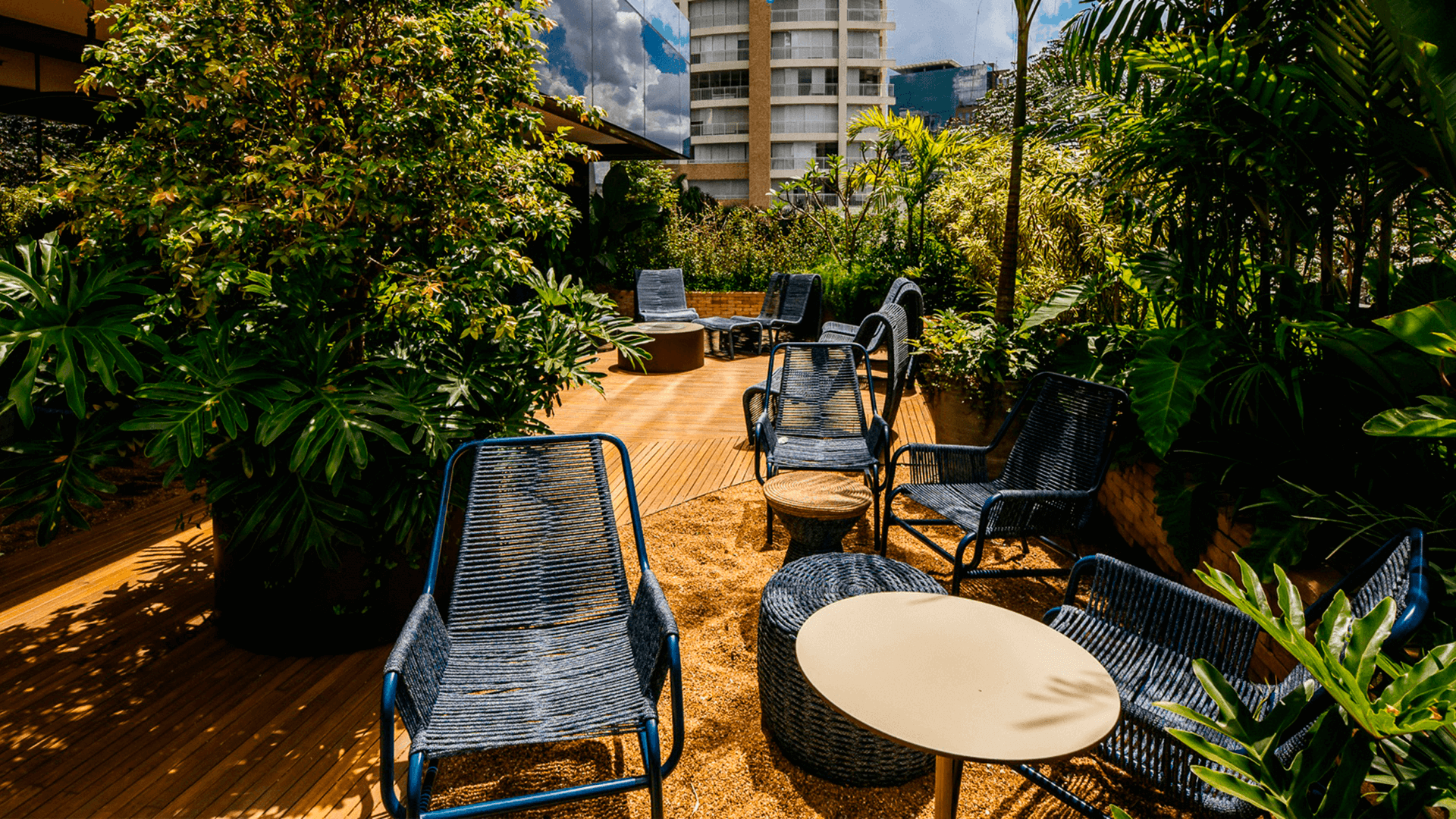 Take the tour: our offices favor work, without leaving warmth and coexistence among colleagues behind. Learn how we designed spaces to make people feel good.

Wildlife is a young nine-year-old company. But it’s growing at a mind-blowing pace. In the last two years, we have gone beyond the limits of São Paulo and opened offices in other important cities around the world, such as Dublin, Palo Alto and Buenos Aires. With such a rapid expansion, maintaining the company’s identity in these new locations is a challenge – my challenge, more specifically, as Mr. operations manager in the Facilities area.

After all, we want people to have a sense of belonging and for each one of our offices to welcome Wilders, regardless of their location on the map. In this sense, the development of a cohesive architectural design for our facilities plays an important role in defining and maintaining a “Wildlife way” of working!

One of my first missions at Wildlife was exactly to take on all the architectural changes in the company’s offices.

Like many technology companies around the world, Wildlife initially had its headquarters in the home of its founders, Arthur and Victor Lazarte. In a short time, the company migrated to the Condominium Corporate Park, in the neighborhood of Itaim Bibi, in São Paulo (SP), where today it occupies two floors. In 2018, while looking for more space, we installed offices on four floors of the Square 955 Corporate building, located on the same street. It was in that same year that we decided to redesign the 11th floor of Corporate Park, adopting a new concept of architecture.

The organization of offices, simply called Facilities, has gone through many different phases in recent decades. Generally speaking, in the 80s, offices were quite compartmentalized, with very well-defined stations. Years later, the open spaces took over many companies, but soon this new style was criticized, due to the lack of soundproofing which compromised the focus on tasks. For Wildlife, the solution was to merge the best aspects of each proposal. After all, it’s no use focusing on the aesthetic part of the environments if they are not functional.

To help us in the task of giving the 11th floor a new face and, consequently, to the entire company, we hired the offices of Bernardes Arquitetura, responsible for remarkable projects such as the Rio Art Museum (MAR), in that state’s capital.

Following a concept of bringing into the corporate environment the feeling of an outdoor life, more natural, we adopted a palette of pastel tones, lots of wood in the furniture, bricks walls and green carpets. We replaced the potted plants with real gardens along the corridors.

In the functional aspect, we did a lot of research to understand what made sense for the type of work at Wildlife. The solution was to build what we call aquariums, which are walls made of curved glass – and have now become a trademark of our São Paulo office.

These translucent spaces contribute to the focus of the teams, without compromising the feeling of an open and fluid environment. The common areas, such as the dining room area, were maintained, because, in addition to being pleasant, they are important to promote socialization.

We wanted to create a welcoming space where people felt good and worked more comfortably.

We recently completed an auditorium on the 8th floor of Corporate Park, with capacity for 258 people.

OFFICES AROUND THE WORLD

In August of last year, we started work on our San Francisco, California office. Located on the 36th floor of the commercial complex Embarcadero Center in the heart of the financial district, the room boasts an incredible view of the city and its most famous tourist sight, the Golden Gate Bridge. Right away we understood that this room had to be the postcard for the company. We brought the concept developed in Brazil, with the exception of the divisions by aquariums, because the place is smaller and destined for the company’s board of directors.

Adaptations to local realities and the specifics to be undertaken in each installation are a constant in our work. In our second office in the USA (Palo Alto, CA), for example, we had to be a lot more careful with information security, because we’re located on the first floor of a very visible building at street level. Therefore, we installed monitors without reflection and took care of the level of transparency in our windows.

We also have a third U.S. office in Orange County (CA). The space brings together teams of artists, so we installed larger tables and chairs ergonomically suitable for such work. Given the kind of task they develop, we had to sacrifice natural light, aligned with our concept, and install artificial lighting spots. In addition, because each country follows unique specifications for the height of tables and chairs, we had to adapt, but still maintaining the face of Wildlife, of course.

The way we adapted the Buenos Aires office was to mix solutions applied in São Paulo and San Francisco. In Argentina we have a large space, and we identified the need to install aquariums and ensure open spaces for meetings with a larger number of people. Because it’s a unit which is not yet fully occupied – but already has the expansion of the team on the horizon – we had to avoid the feeling of empty space. For this, we invested in a project that will unfold, as needed. We have created a lounge with long benches where people can relax and chat. However, we’ve installed an entire electrical structure that will allow us to set tables and the equipment needed for work in the future.

The inauguration of our office in Argentina took place in early March of this year. At that time, we were already thinking about adjustments in our Dublin office in Ireland, which should follow a structure very close to that used here in Brazil.

CHALLENGES AND HURDLES ARE PART OF THE GAME

Working with facilities involves many logistical challenges and takes time to research the needs of the teams, the type of work they develop and the best way to accommodate them in a pleasant and professional performance-friendly environment. At the same time, we have to be aware of the best solutions offered by the market, which is always evolving. At a time when Wildlife is becoming increasingly global, travelling has also become part of the routine.

For these tasks, we need willingness and flexibility to face tight and unforeseen deadlines.

Remember: we are talking about a company that is growing 80% each year! There are many stories of nerve-wracking situations that we now remember in a fun way as important learning experiences.

With 24 hours to go before the job on the 11th floor was supposed to be completed, for example, my team realized that important details were missing to make the place cozier. We crisscrossed São Paulo all night looking for office suppliers for materials, plants and other objects. We even had to find the suppliers for the dolls of the characters in our games!

In Palo Alto, we went through several furniture stores looking for the best delivery date, because we had only one week before the arrival of the teams. Once we acquired the basics for them to start working, we returned to Brazil to finish up the project of adapting this office, which we did in two weeks. These are the types of hurdles we face, but they make up for great stories.

COMFORT AND CARE IN TIMES OF A PANDEMIC

Social isolation has imposed on the team the challenge of working from home. But that doesn’t mean the Facilities team is inactive. Far from it! If you can’t enjoy the comfort of our offices, we try to develop initiatives that bring to the homes of our professionals a little of the spirit of Wildlife. We were one of the first companies to transport furniture into people’s homes, as needed. We did virtual happy hours and sent cakes to all those who had a birthday. We want to show that the company is taking care of them, even at a distance.

As for the offices, we are always open to feedback because they signal new paths and ways for us to continue evolving, according to the growth of our brand.