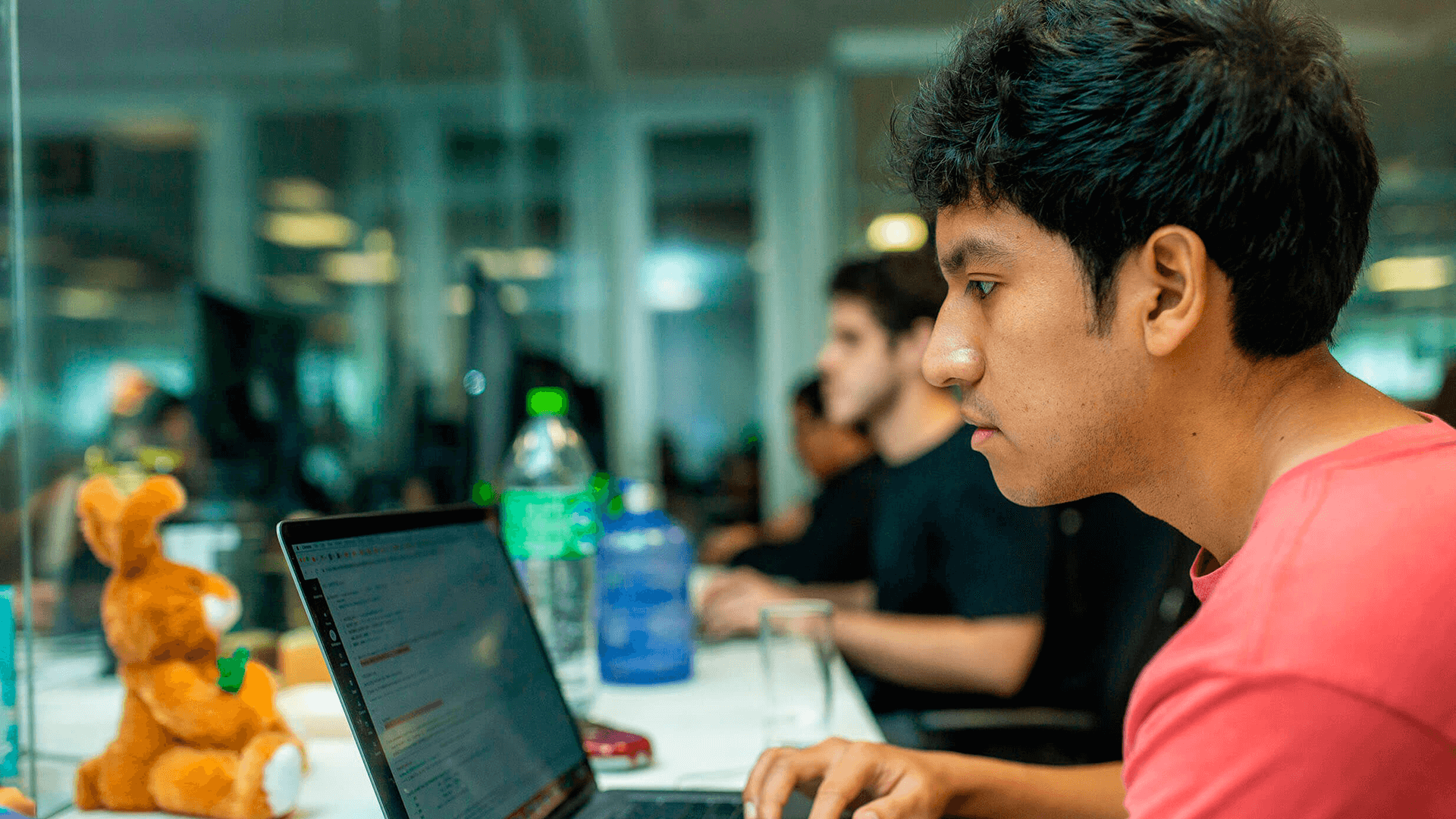 Director of Engineering, Data & ML Engineering, José tells the story about how he fell in love with Brazilian culture.

José Noblecilla’s story with Brazil began in 2014. Since then, José – who is Data Engineering Director at Wildlife – has become adept at discovering flavours and urban hideaways. Graduated in Software Engineering at Pontificia Universidad Católica del Perú, José was studying for his second graduation, Mathematics, when he decided to leave his job and the new training in his country to try a master’s degree in Technology in Brazil.

The decision to leave Lima and cross the border was an important turning point, and so José started a new life in Brazil when he was 23 years old.

He grabbed his passport and bought a one-way ticket to continue his software studies. At first, the idea was to accompany his girlfriend at the time, who had similar plans. Since then, it has been six years of pure Brazilian essence, built alongside many Wilders at the city that has become his new home: the capital of São Paulo, also known as Brazil’s main financial center.

In the first semester on Brazilian lands, José had his first meeting with a Wilder: Wildlife’s CTO and co-founder Michael Mac-Vicar. Mike gave a presentation at a subject related to José’s master’s degree at University of São Paulo (USP), which was a welcome coincidence that led to the first conversation between them at the end of the event. During that brief chat, José found out that the company – then called TFG, Top Free Games – was hiring new talents.

Even with his schedule almost fully taken by studies, José was very influenced by the knowledge brought by Mike to the presentation, and decided to visit the company and see if he could be one of those talents. It was clearly an opportunity that he could not waste. However, what seemed to be a common recruitment process, turned into very curious moments, marked by language obstacles and technical choices.

“The funny part is that I emailed them and the recruiter replied, saying that she wanted to ‘bater um papo’ with me (which means chatting with someone in Portuguese) at Wildlife. But at the time I didn’t know what that expression actually meant.”

After searching Google for what “bater um papo” meant (after all, some Portuguese expressions can be a mystery to someone who had just arrived in Brazil) José headed to the company’s office. Wildlife operated in a very smaller location back then, and had just 25 people working there.

When José got there, he was welcomed by a recruiter, with whom he spoke about his previous academic and professional experiences. So far, everything was under control. But then the conversation got into a subject that, for Wildlife specifically, it’s mandatory during an interview: games. Even more specifically, mobile games.

“Do you currently play anything?”, asked the recruiter. José, a dedicated student who was focused on completing his master’s degree, gave the most sincere, if not embarrassing possible answer: he didn’t play anything. Even worst: he didn’t even own a cell phone. When he moved to Brazil, he didn’t think it would be necessary. (For the record: to get to Wildlife’s office that day, he had printed a map, like any foreign tourist in the ’90s would do.)

“The recruiter freaked out: ‘What do you mean? How do you live?’ “, he laughs. José’s story intrigued the recruiter. After all, what would motivate a candidate like him? It was not common for someone without any contact with mobile games to be interested in working at a gaming company. But the company values diversity and technical expertise, so José’s profile was considered perfect for the company.

After that peculiar chat, he went through two technical interviews – one of them with Mike himself – and he succeeded in both. In one of them, the CTO asked José: “Do you want to work with games?”. But José was adamant: “No, if it’s to make games I don’t want to. I want to work with data”. After all, data was his expertise, but the problem was there wasn’t a team dedicated to Data Engineering at the time. “Well, if there’s no team, we can create one”, he suggested.

Two weeks later, he was invited for another test, during his master’s course holiday month. It was the definitive opportunity José needed to show his worth and land a job position that didn’t even exist yet – and that’s exactly what he did.

Starting to work at Wildlife made José change his course again, and he left his master’s degree in the middle of the course to start his career in Brazil. “At that moment, I already knew what I wanted to do, and I really wanted to work there. I liked the people there and I thought the company was going to grow so much, and really explode in the following years.” And it did!

By that time, José exchanged his master’s thesis for the company in its initial phase, and started a data job that would get stronger over the years. Today, the data team led by José is made up of 35 people.

Apart from the company, other things have changed since José arrived in Brazil. Besides becoming a leader among Wilders, he has adapted very well to the gamer culture and already has his own smartphone – a gift from a friend. Now, he plays whenever he’s got free time. In fact, he is one of the most excited Wilders when it’s about testing the games and doing internal championships.

“Whenever there is a new beta, I download it, keep playing and get hooked. I have already organised some competitions among us and have won some of them too. Tennis Clash is what I play the most!”

A PERUVIAN IN LOVE WITH BRAZILIAN FOOD

If during his master’s degree and living in Butantã near the university, José was a student who didn’t go out much and interacted little with the city, everything has changed when he started working and living closer to the Wildlife offices, currently located at Itaim Bibi.

He confesses that during the first years he stayed in what he called a comfort zone trying to look up for things in Brazil that resembled Peru. However, over time, he fell in love with local cultures and discovered gastronomy flavours that took him to several new places.

After around three years in Brazil, José decided to leave the comfort zone and explore the city deeper, until he discovered samba and began to travel more frequently.

“I became more relaxed. I didn’t feel like I was in Brazil because of my relationship anymore. Today, I’m super comfortable and even learning to play the tambourine.”

José says he’s picky on the menu and on the environment as well. Besides good gastronomy, he prefers places where the highlight is Brazilian music and interaction with São Paulo citizens whether it’s listening to a samba, buying plants or coffee. Here he lists his favorite places in the city.

TOP 3 PLACES TO GO (after the quarantine) ACCORDING TO HIM

Casa de Francisca
Casa de Francisca is a recently restored historical asset located in Palacete Teresa, which hosted the first musical instrument store in the city, Casa Bevilacqua. It has also hosted the music publisher Irmãos Vitale and the Record radio station. The region is known as “São Paulo’s musical corner” and music is a serious matter there – there’s no table service during the shows as a matter of respect for the musicians, so drinks and dishes can only be obtained at the bar.
(Photo: Disclosure/Casa de Francisca)

Casa Barbosa
Casa Barbosa is a small concert hall listed as a historical asset. It’s named after having hosted the old pension founded by Dona Barbosa in a building from the 20s. The space is small and the shows start in the afternoon at popular prices. It’s usually crowded up the sidewalk, so get there early. The rhythm is root samba, but it also opens space for jazz and blues, all washed down on caipirinhas, beers and other drinks.
(Photo: Disclosure/Casa Barbosa)

São Paulo’s historical downtown
The city’s historic center has so many attractions that it’s difficult to pick just one. It’s the corresponding neighbourhood to the stretch of land on which the city was founded on January 25, 1554. We can list those attractions that are worth visiting: the Square and the Cathedral; Páteo do Collegio (Anchieta Museum); Solar da Marquesa; São Bento Monastery; and São Paulo Municipal Market (or Mercadão, as it is affectionately called). The list is huge.
(Photo: Diego Torres Silvestre/ Flickr)

According to José himself, one thing that has clearly changed is that the “Peruvian José” was someone more reclusive. Used to the academic world, he didn’t work as if he was in a team, he was mainly focused on his own personal goals and still slipped in local slangs.

“One thing that I like a lot about Brazil is this mix, and the language has been fundamental in order to understand people better. I feel that my Portuguese is much more natural now. Today I searched the internet for a how to bake a bread tutorial in Portuguese, instead of searching it in English or even Spanish. Currently I feel that the Portuguese language is a central point in my life.” José says.

At first, however, José says adapting to the language was a little frustrating. He needed to write down several ideas that came up during meetings and conversations as a manner to explain himself. “I was very nerdy too”, he says.

Besides playing the tambourine and trying his hand with northeastern slangs (one of his best friends comes from northeastern region of Brazil), the “Brazilian José” realized that he can also trust people more often, and began to enjoy sharing more moments with them. Among his learnings are some new social habits, including happy hours and having fun with his team.

Of all the changes he’s experienced, José understands that becoming a Wilder was an important part of the journey. However, he recognizes that there is room for diversity with people who enjoy taking risks at different levels. There’s space for all profiles at the company.

“I like the risk a lot, I get very excited when there is a problem to be fixed. This is the perfect scenario for me – I’m in Brazil, working with and doing the things I love.”