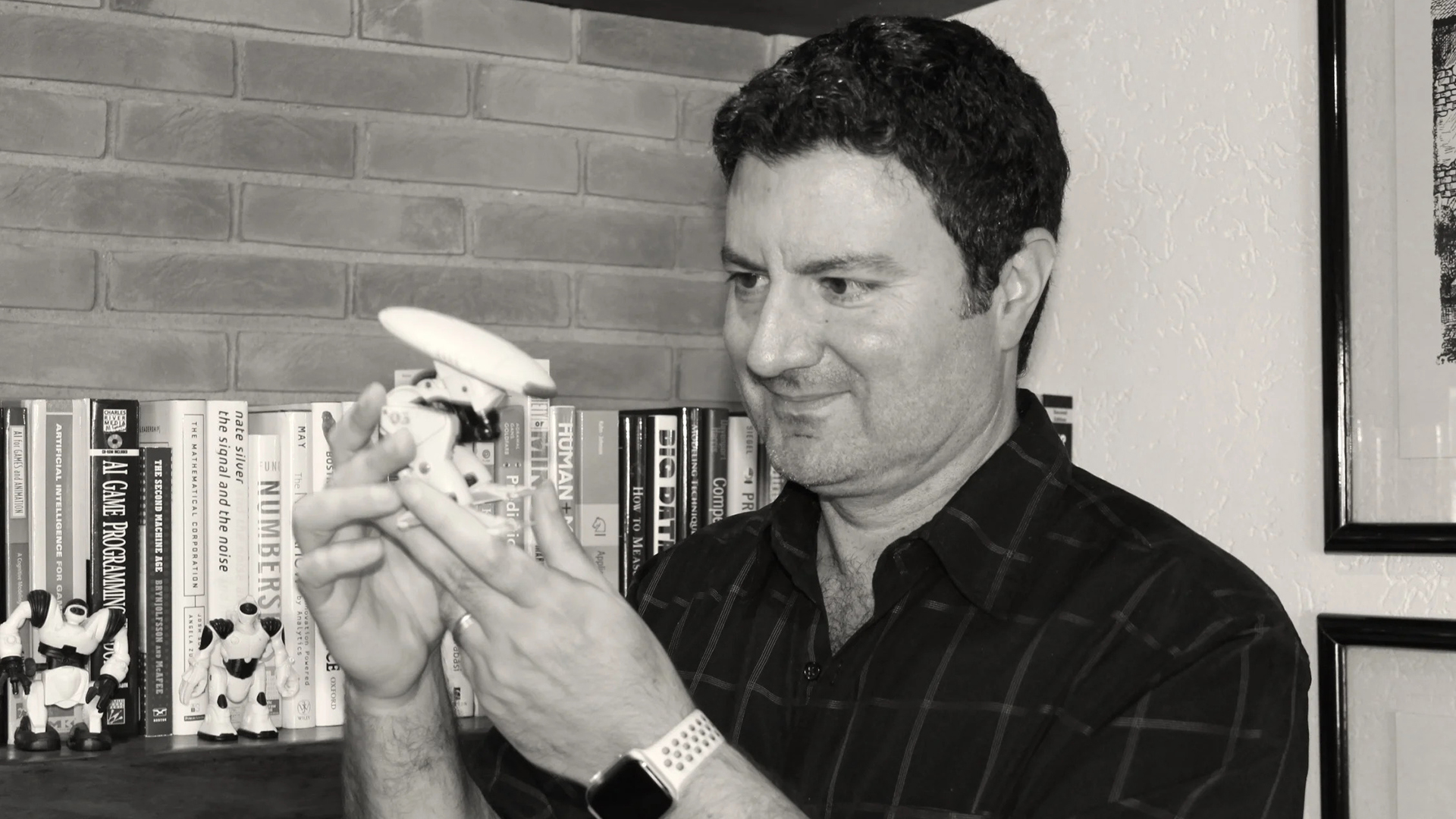 Emiliano Castro, Principal Data Scientist at Wildlife, tells us what are the main challenges which those who want to work with games face on a daily basis

The boy who wanted to build robots graduated in Mechatronics and went on to work with another passion related to technology: the gaming industry. Over 20 years ago, data scientist Emiliano Castro found in AI (artificial intelligence) a stimulant point of confluence between areas that, since the very beginning, catered to his interests. Today, as a key part of Wildlife Studios’s Data Science team, he tells us what are the most important skills to develop if you wish to build a career on this ever more needed part of the world of games.

Castro remembers his beginning in the industry we know today as “data science”, back when this field didn’t have this name. “It was common that we would treat everything as optimization problems solved with a broad spectrum of skills crudely grouped together under the term ‘artificial intelligence’. From time to time, people will make a fuss about this particular term – AI – because it becomes trendy, which is really something cyclical. But back then, it was what we had: algorithms based on very specific systems, smart control skills, heuristic decision trees, finite state machines, a very wide variety of machine learning processes and so on”. Back then, he says, the terminology was somewhat different, but Castro always was an enthusiast for such methods and their application in the gaming industry, where he started to work while in college.

“Almost every game, from the simpler to the most complicated ones, makes some use of AI. Sometimes, it happens in such simplistic ways that we barely realize it, such as is the case with rule-based decision trees or finite state machines. Also, on every genre in every platform, a game must work as a kind of ‘dialogue’ between player imagination and the creative team behind the title. These are entertainment products that rely fundamentally on interaction. Great games can and will maintain an optimal degree of challenge: not too easy, but also not too hard. But how do we find said degree, which is so dynamic and subject to change depending on the type of player? These are just a few examples’, he comments.

“The big question is: how do we take, in an automatic manner, millions of small, daily decisions to attract players and, through our games, bring them memorable experiences for extended periods of time – while at the same time ensuring a good return of investment for the company? It is not the easiest of tasks”

According to Castro, science teams are involved in pretty much every aspect of a game’s development, end to end, creating algorithms to make such decisions.

And in order to create these algorithms, it’s not enough to just assemble a team with dozens of professionals: data is the raw material here. It’s the data that will tell you a story about player behavior, what reactions he or she took and pretty much every little decision taken from our side about it. “We’re always experimenting, and every player’s reaction is documented in order to continuously learn both on the discovery of patterns that allows us to evolve our games and their mechanics, as well as developing mathematical models that help us make decisions in an optimized manner”.

DATA SCIENCE ON THE DAY TO DAY OF GAMING

When someone sees an ad about one of our games, even before the very first click, that person is watching the end result of a long chain of decisions taken in a fraction of a second.

User acquisition is one of the most critical processes within the company – we dedicate a large number of highly qualified professionals to solve a problem that never stops changing in nature. The rules of the mobile ad ecosystem shift all the time, so this is a very ‘high-risk, high reward’ environment for those who enjoy big challenges

And it’s not just about making segmented choices, following channels and analyzing costs. “We have a team full of artists, scientists and engineers dedicated to a problem that, honestly, is quite charming: choose, among a huge number of possibilities for script, special effects and formats, which one of those will bring the best advertising piece that will ensure that potential players download and install our games”.

Castro says that it doesn’t stop there: when done properly, this opens the way to another, much longer chain of decisions that comes whenever players fire up the gaming app, with the sole objective of offering the best possible experience to each player”. For him, this is, at the same time, a challenge and a major advantage when it comes to mobile gaming, an industry that  has enormous control over its products and is able to adjust them continuously.

“Mobile games are ‘live’ products” – he states – “and when the process is based on learning through experimentation, data gathering, machine learning etcetera, it sets the perfect scenario for a very sophisticated, scientific approach”. Of course, this all depends on the scale of the operation. “We have over 60 games published and, recently, we passed the 2 billion download mark. We have huge scale and an enormous diversity of technical issues to solve, all the time. This is a full on playground for us”.

In order to fill in the blanks, Castro reminds us that the industry is far from stable and, because of that, you have to be constantly adapting. Behavior, trends and technology change at a higher pace than other industries out there, even in this digital economy we live in. Perhaps the most prominent case of this, “recent changes on privacy terms regarding online ads have kickstarted a transformation in our user acquisition process”.

DATA IS THE CORE OF EVERYTHING

Castro is happy to say that Data Science is Wildlife’s heart, ever-present in decisions on several of the companies’ departments. “The majority of micro-decisions made during our day-to-day operations are based on algorithms we created with the help of our data teams, and even the bigger, more major decisions are taken by considering insights extracted from raw data by our scientists”.

For him, Wildlife allows the existence of an environment that positively instigates its professionals.

“When we talk with other departments and business units, we do it in familiar and favorable terrain for data scientists, because this is something heavily ingrained within the company’s culture: it is based on hypothesis construction, experimentation and data. ”

He explains that, more often than not, you will see executives dominating concepts not very known outside of the more technical roles, such as predictive analysis and evaluation models. This gives even more autonomy to all teams since, according to Castro’s own words, “even the youngest of our professionals feels at liberty to question and debate”.

Not only that, but Castro tells us that this culture allows teams to take some calculated risks, which in turn favors innovative solutions for Wildlife. “A very obvious example of that for me is the use of the Reinforcement Learning concept on offer recommendations within our games. We saw that this was a good fit to mesh together the tech side and the business side of things and, quickly enough, we constructed a proof of concept. Today, we’re already incorporating what we have learned on our game publishing tools and, at the same time, we’re also testing these skills in other applications”.

Wildlife Studios’s Data Science department is always expanding and on the lookout for new professionals who fit our very diverse, problem-solving profile. One of the company’s main challenges, according to Castro, is to attract experienced professionals in a relatively new market. Therefore, he lists three important skills that the company is always looking for:

Analytical basis – Academic formation can come in a diversified number of areas, but our search always veers to where we can find professionals with a high degree of analytical basis. “We’re looking for people with a high technical level, regardless of background, and on this matter, we have been positively surprised with self-taught professionals, graduated outside of the exact sciences. Of course, there is a current majority of professionals that come from fields such as engineering, math, statistics, physics and others like those, but knowledge diversity is more than welcome for us”.

Programming – Knowing the theory is important, but in a gaming company, implementing software is a daily given. Therefore, it is key to bring some familiarity with programming environments and statistical libraries, data visualization and machine learning. “A candidate who brings a good, solid base, even one who’s not familiar with our technological stack, usually can learn it very quickly, with the help of colleagues and a good dose of dedication and study. But it is also common that a lot of teams look for someone with a more developed base”.

Problem solving – A highly coveted skill at Wildlife, and also of the most difficult to be found, entails the capacity of clearly defining problems that need solving before you think of a solution. “If you’re gonna work, say, at a real-world-optimization problem, it won’t do you any good to look for said problem’s ‘briefing’, so to speak. You’re the one who will define a problem, work on some background, choose simplification processes etcetera. You’ll need a curious, open mind to be creative and capable of imagining new forms of defining a problem, which sometimes is an interesting path in the search for simpler ways to solve said problem. It is not uncommon seeing even the more seasoned professionals rushing into problem-solving mode to tackle an issue they barely investigated beforehand”, Castro comments.

In this dynamic, heavily influenced by its potential to customize products, these are some of the key elements that form the profile for those who seek to develop applications in Data Science, with a heavy economical impact.

“We want professionals that feel more than just ‘comfortable’. We want people who feel motivated to work with data-based problems that are extremely complex and never stop changing”

The company’s culture of excellency is based on its people, thus Wildlife aims to grow with a diverse team, in a way that shows the effort to create an environment that values equality and opportunity in every possible sense. And for that, it invests in initiatives that attract talents among women, black people, LGBTQ+ communities and people from the most diverse areas of formation. In Data Science, this is not different.