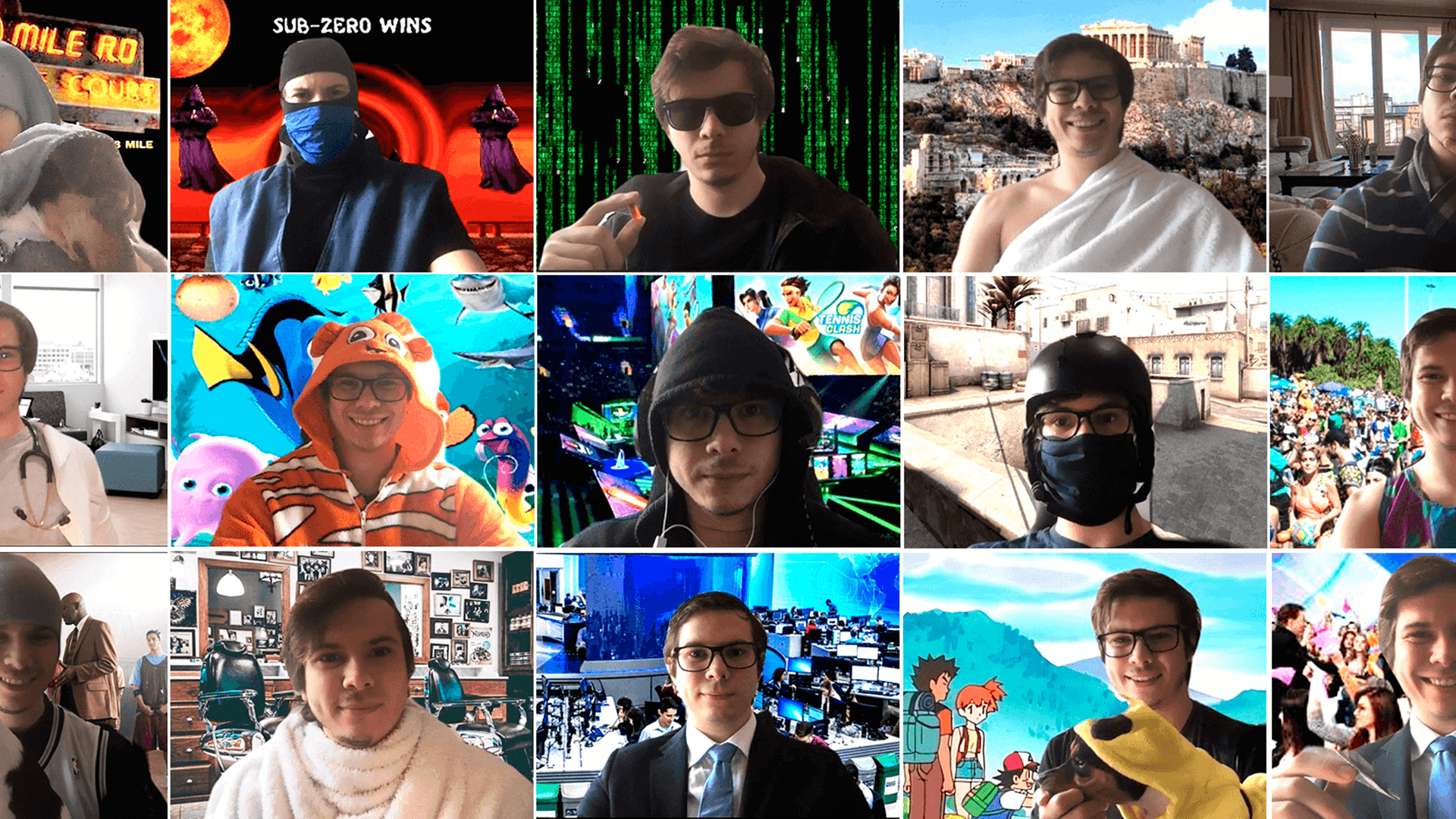 Working From Home at Wildlife: using his creativity, Luiz Piccini amuses colleagues and proves that, in times of social distancing, humor is indispensable.

For Luiz Piccini, product manager of Tennis Clash at Wildlife, the opening two minutes of a work meeting are key to determining the tone of the conversation. “It’s a time to talk about amenities while the other participants arrive. It’s the famous ‘icebreaker’ moment”, he says.

In this current situation of social distancing, where face-to-face meetings replace virtual gatherings, Piccini took the icebreaker moment to another level, becoming a true celebrity, both inside and outside Wildlife. In addition to the agenda of the day, something else is on the minds of those participating in these videoconferences: what is Piccini going to devise today?

From meetings between developers and artists to broader alignments across the company, Wildlife meetings play an important role.

WORK FROM HOME: A NEW LIFESTYLE FOR WILDERS

“Working from home was something rare at Wildlife. As a rule, our work has always been in person. Our team today has seven people, and normally we are all gathering in the same room. The exchange of ideas was constant, just by tapping on a coworker’s shoulder”, says Piccini. With offices designed to ensure coziness, focus and, at the same time, foster dialogue between team members, the need for work at home required some adaptations.

Piccini says that from the beginning, he proposed that the team try their best to preserve their rituals. The daily stand up for task alignment, performed at 11:00 a.m., was transferred to Zoom. In order to keep the team together and stay in touch with the work done by each one a touchpoint meeting was created at the end of the day. “Since we’re not seeing each other all the time, this conversation that ends the day is important to identify the progress of tasks and solve bottlenecks issues”, he says.

However, Piccini’s great concern during this period has been to ensure the team’s well-being.

“In such context, it’s easy to blur the lines between home and work. Just because the person is at home doesn’t mean that they should be available all the time.”

To prevent this, some guidelines were put in place: no WhatsApp as a working tool. The communication tool adopted was Slack. With this app the group can tell when everyone is online, when someone is out for lunch and, at the end of the day, when the shift is over.

It was during his personal process of adapting to home office (and meetings using Zoom) that Piccini had the idea that made him famous throughout the company. “In mid-March, we had a regular meeting set up by one of the founders, Arthur Lazarte, and about 12 other people. Some seemed a little awkward with the tool and a messy room appearing in the background. It took me some time to find a corner where I could do the meeting without drawing so much attention to what was behind me,” he recalls.

That’s when he remembered Zoom’s function of including dynamic backgrounds. “I chose the image of a living room with pictures of a tennis court. Some got confused and believed it was really my home! Others even commented: ‘Piccini is such a fan of Tennis Clash that he has themed pictures at home!'”, he says.

At the next meeting, the group was even more surprised. Dressed in the uniform of the Palmeiras’ soccer team, his team of the heart, Piccini appeared on the screen with the image of full bleachers just behind him. His coworkers laughed! Others joked: “What about social distancing, man?”. Since then, everyone has been anxiously awaiting the new performances. There were also jests, which became increasingly elaborate and demanded creative solutions.

In a meeting attended by Brazilian TV presenter Tiago Leifert, invited by Wildlife to interview the founders and talk about their passion for games, Piccini (unaware of the illustrious presence) surprised everyone when he appeared in Ancient Greece, with a white towel as a toga. He has also been at the bottom of the ocean, dressed as Nemo, from the classic Pixar animation studios, and even in one of the arenas of the sinister Mortal Kombat, dressed as the fighter Sub-Zero. “To reproduce the costume, I put on a blue mask and a pair of jeans over my shoulders. It worked!”, he says. Even his dog, Merlot, has participated in the joke, appearing as Pikachu.

SUDDENLY, A MEME IS BORN

One of the highlights of Piccini’s many incarnations was during a meeting that brought the entire company together. When he appeared on screen, everyone was surprised to see a scene that repeats itself daily in the homes of millions of Brazilians: Piccini was on the bench of Jornal Nacional, a television newscast from Globo network. “I put on a suit, straightened my hair and put JN’s newsroom as my background. At the end of the meeting, Victor Lazarte [Wildlife’s CEO] asked me to say ‘good night’ William Bonner style [the broadcast journalist] to my colleagues,” he says. It was such a success that he says he received pictures from friends on WhatsApp of his performance, with the message: “look what a guy from my company did!”. These friends weren’t Wildlife colleagues. Piccini had become a meme!

A production engineer with a degree from the Polytechnic School from the University of São Paulo (USP), Piccini recognizes, at the age of 28, that humor has always been part of his personality, despite defining himself as a rational and analytical person.

In addition to helping with the work routine, now focused on Tennis Clash, his problem-solving skills have been put to the test when his amusing appearances on Zoom don’t quite go as planned. “I remember once I applied a lot of gel to my hair, did a Mohawk hairstyle and put the image of the punk rock band Against Me! in the background. There was only one problem: my hairstyle didn’t show up on Zoom. I had to act fast, changed my hair with an emo-type fringe and changed the background to a picture of the band Simple Plan”, he says, laughing.

MIND AND BODY IN HARMONY

The period of social distancing brings difficulties not only regarding professional performance, but it also requires a series of measures to keep the body healthy and the mind serene. Even with the inventive jokes on Zoom, Piccini recognizes that the tool does not replace the face-to-face meetings.

“That’s what I miss the most. Personally, we have a non-verbal communication that is very revealing, especially for those who manage people. I’ve happened to once notice a coworker looking somewhat sad at the office and called him to talk, to offer help. From a distance, this kind of help becomes a little more difficult”.

In this sense, Piccini reinforces the importance of maintaining some rituals for the team, even those that have no direct connection with the work. “At Wildlife we have a coffee break at 4:00 pm with cheese bread. At home, I try to maintain this ritual. I make myself a cup of coffee, call someone at this time and have a light chat. That keeps the relationships in check.”

Piccini reveals how he identifies with one of Wildlife’s values in particular: “We care for each other”. “Working with joy, even in a period of adversity like today, is important. One thing I like about the position of Product Manager is that I am like a cheerleader, raising the team’s morale. In addition to the humane aspect, this is good for the project, because people are more motivated”, he explains.

Alongside caring for the mind, Piccini stresses the importance of exercising and eating well. At the end of the day, he and his wife, Vanessa, practice Pilates with an online coach and then cook dinner together. Videos posted by colleagues on Slack also bring valuable tips on food preparation, body care, and other topics.

When Wildlife chose to put the team into home office, the company had to act quickly to adapt to this new way of working and ensure the comfort of its professionals. For those who wanted it, the company transported the office chairs to the employee’s homes. Artists received their graphic design monitors and tablets. Piccini organized his home space with objects he brought from his desk at Wildlife. He believes that it’s essential to create an environment in the home that we identify as a workspace, because it helps define the two realities.

“In the first week of social distancing, Victor [Lazarte] sent us an email asking how the company could help his team and the society. For this second audience, I suggested donating masks to the Hospital das Clínicas, which is where my wife works.” In response, Wildlife announced the donation of 1 million masks to the hospital through the action Tech for Good, along with other tech companies. “It was amazing. With this kind of support, I believe that everyone can look for ways to work more lightly and, of course, with humor”, he says.